In Perashat Hachodesh and during Passover we often discuss the passover Sacrifice that we used to do in the Holy Temple in Jerusalem. It says: in   Shmot – 12- 21:

Draw out, and take you lambs according to your families, and kill the passover lamb.

The following illustrates a growth  experience. As you grow in life you find that you need to abandon previous beliefs. These might be your own beliefs or those of your parents, or maybe just a small developmental step which involves your personal renewal.

…On the tenth of the month’ Rabbi Yochanan says the Passover Sacrifice is only good when owned by the individual and you say take it on the tenth? Instead this teaches us that the Jews tied the sheep to their bed posts on the tenth and the Egyptians would enter and see this scene and they would die from the site. Rabbi Chiya the son Rabbi Ada from Jaffa says extend and take for yourselves sheep for each family and slaughter the sacrifice this teaches us that each one would take the Egyptian G-d and slaughter it in front if the Egyptians…

Sometimes it is good to make a public statement for what you believe in. When you see something which is wrong you should stand up against it. This applies even if the terrible thing is a powerful belief.

A nice illustration of this concept is a common story. Many Jewish parents feel that Judaism at best takes a secondary role in our lives. They believe that the modern world has much more to offer than Torah. They do not realize that a good Jewish education is superior to any public school education.

Very often a child rebels against his parents and goes away to Israel to study in a Yeshiva. Such children have not accepted their parents beliefs.

The parents feeling of rejection can be so devastating that they feel as if they are going to die. They see no difference between Torah Judaism and the Moonies.

These children have in essence slaughtered the gods of the Western world. They have declared themselves free.

The Month of Nissan is a new beginning. Let us be free during this month of freedom.

The Yidish author Shalom Alechem wrote several very funny yet realistic stories about Mishloach Manot.  In his story “Mishloach manot” He tells of two close friends each of which exhausted their Jewish domestic help on Purim by having them run around all of Kasrilevke to deliver mishloach manot.

The two girls met each other on the way to deliver mishloach manot to their respective Bosses. Tired from schlepping, they sat down to talk about how all the people who received mishloach manot  had not  given them a reasonable tip. They were both mutually attacked by hunger and a need to consume the delicious vittles of Honey cake and a Huge Hamentashin. They ate each other’s just to keep it even.

From the above story we learn that it is important to send a politically correct Mishloach Manot. 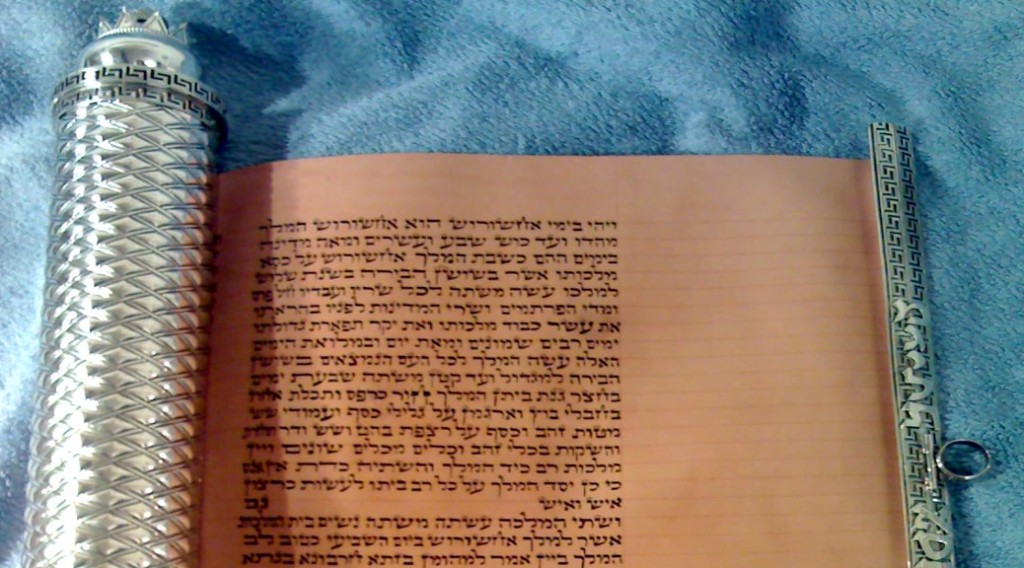 Each Megila on Gvil is a work of art. They are written on Gvil which is a leather parchment which has been processed with Afatzim – Oak gall.

This is my theory of why we are in galut (exile) for so long and why Hashem does not seem to respond to our prayers and our needs. To do that we have to look at some of the past history.

About 2,500 years ago our first Beit Hamikdash (Holy Temple) was destroyed by the Babyonians. It was a short time later that the Babylonians were defeated for destroying the Beit Hamikdash. Remember the writing on the wall: mene mene tekel ufarsim predicting the fall of Babylonia and the victory of Persia and Midea. We find about this time the story of Esther. Haman, the evil one, plotted to destroy all the Jews, but Hashem turned it around and made it so that Haman himself was hanged and the Jews were saved. Hashem responded very nicely for the Jewish people. For this we celebrate Purim every year.

The galut at that time only lasted 70 years. That was done for the sin of avodah zarah (idol worship). The second Beit Hamikdash was built only 70 years after the first one was destroyed.

Now we go about 200 years later and we find that the Greek army had completely engulfed and dominated all of the land of Israel and forced the Jewish people to disobey their laws. Then came a group, the Maccabees, a small group who defeated the large powerful Greek army, chased them out of Eretz Yisrael, rededicated the Temple, lit the menorah—and for that we observe the holiday of Hanuka.

Do Not Take the Name of G-d Your lord in Vain.

There was once a man who never wanted to take an oath, he was very wealthy. When he was on his death bed he called his son. This man said to his son, “My son I warn you never to take an oath for truth or for deceit because all the wealth which I have accumulated is only because I never took an oath even for the truth. G-d has given me success everyday, with every transaction, with anything I have done.” The son answered, “Dad I will fulfill all of your commands. I will never swear at all.”

When the father died…gangsters came to this orphan and demanded a lot of money which they claimed his father owed….They went to court and asked the orphan to swear, he said to himself, “What can I do, if I swear I will desecrate the heavenly name and defy my father’s commandment. It is better for me to pay then to swear.” He paid them almost all of the money his father had left. He had only ten golden dinars left… The gangsters then came and told him, “pay us what you owe or swear that you have no more money.” The orphan answered, “I will never swear.” They captured and imprisoned him.