Lately it has been asked how we can mourn on Tisha Be’av when Jerusalem has already been rebuilt.

Our Rabbis of Blessed memory have told us that the reason behind the destruction of the temple was factional and individual hatred. Below you will find a story which I translated from the Talmud. (Gitin 45b)

Because of Kamtza and Bar-Kamtza the city of Jerusalem was destroyed. 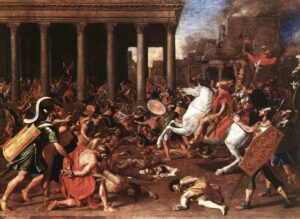 There was a particular man (who we will call host) who was friendly with Kamtza and was sworn enemy with Bar-Kamtza. The host made a feast. He told his servant to bring Kamtza. The servant brought Bar-Kamtza instead.

When the host got one look at his uninvited guest he went over to him and said, “You are my sworn enemy, What [the heck] are you doing here? Get out!!!” 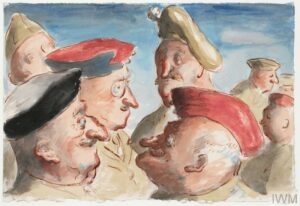 Bar-Kamtza then offered to pay for the entire feast. The host then physically threw him out. (I am sure that the whole room was quiet and that all present knew exactly what was happening. Thousands of people become quiet when there is fight going on)

Bar-Kamtza said to himself, “Since the rabbis were present and they said nothing I see that they agreed. I will go and inform the authorities. He went to Rome to see the Caesar. Bar-Kamtza said to Caesar, “The Jews are rebelling.” Caesar answered back in non believing tone, “Who says?”

When he got to the temple some wanted to bring the calf so as not to stir the anger of the Emperor. Rabbi Zechariah Ben Avkulas said that if we bring this sacrifice people will come to believe that it is permissible to sacrifice unfit animals. Those present said to Rabbi Zechariah, “So let’s just kill him.”

Rabbi Zechariah did permit this. He said that murdering the man would mislead people to believe that if a person damages a sacred animal that he should be put to death.” 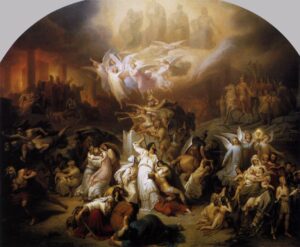 He then went over to a child and asked to tell him a verse. (this was a method to tell the future) The Child answered “I will lay my vengeance on Edom through the hands of the my nation Israel…” (Ez. 25,14) Nero said to himself, “G-d wants to destroy his people and wants to wipe his hands clean on me.” He went and converted to Judaism and one of his prodigy was Rabbi Meir.

Word then made its way to Aspasyonos Caesar who laid siege on Jerusalem for three years.

In Jerusalem there were three very wealthy men. They were Ben Nakdimon Ben Gurion, Ben Kalba Sabuah, Ben Tziztzit Hakeset. Nakdimon was called that because the son spotted for him. Kalbah Sabuah was called that because whoever visited him hungry like a dog would leave satisfied. Ben Tzitzit was called that… because he was so powerful that the strings from his Tziztit were over the faces of the important people of Rome.

Rav Chisda said that the one measure of food need 60 of wood to get cooked.

They had enough food to sit through a 21 year siege. 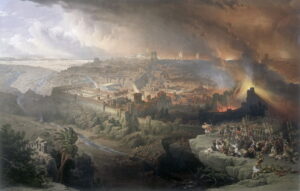 They went and burned all of the food. (hoping to rile the people up to fight) This caused starvation….

When we examine the structure of this story we see that all of the Jewish players in the story were very short cited. For a momentary bit of sweet revenge they collectively led to the destruction of Jerusalem.

This is the reason why we fast on Tisha Be’av. Those who would celebrate will have opportunity when we cease hating each other. It is said in the books of the Prophets “The …[fast days] will be turned from misery to happiness.

LET’S ALL WORK TOGETHER TO CHANGE THE MISERY OF HATRED WHICH FORCES US TO MOURN OUR OWN DESTRUCTION. 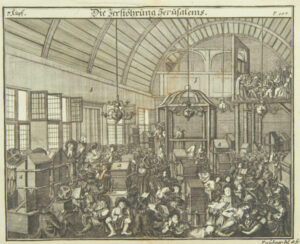