18 And it came to pass, as the man of God had spoken to the king, saying: ‘Two measures of barley for a shekel, and a measure of fine flour for a shekel, shall be to-morrow about this time in the gate of Samaria’; 19 and that captain answered the man of God, and said: ‘Now, behold, if the LORD should make windows in heaven, might such a thing be?’ and he said: ‘Behold, thou shalt see it with thine eyes, but shalt not eat thereof’;

This Haftara brings to the fore the dialectic between those who are optimistic, even when things are hopeless and “realists”. G-d can use the “lowest” people to be the messenger to fulfill the Word of G-d. When this happens it can make the elitist, leadership look very bad. 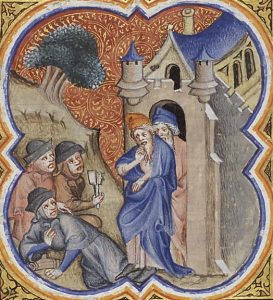 This is the point of the Haftarah. We are placed outside the gates of the city which is the abode of lepers. Hadad, King of Aram, was laying siege on the city. The Lepers, like everyone else, were on the verge of starvation. They decided that they would not find food in the city. Instead they tried their luck to see what would happen if they went to the Aram encampment. It need not be stated what kind of welcome four Jewish lepers, who were certainly odorous, could expect from the besieging forces of Aram.

When the lepers arrived at the encampment they found it empty. Apparently the Aramenians had escaped in a hurry. They left all of there horses and food. We are then informed by the Navi Prophet that G-d had made sounds of a multitude which was going to attack the encampment of Aram. When they heard thousand of horses racing at the camp they headed for the hills leaving behind all their valuables. 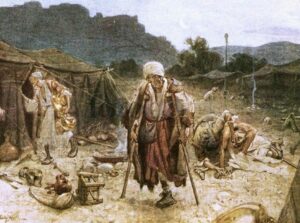 The hungry lepers devoured all that they could eat and plundered what valuables they could collect. They then decided that it would be nice to tell the Jewish people of the city that the siege had miraculously ended.

Upon hearing the news of the abandoned encampment the king and his advisers could not believe what had happened. The king suspected that the Aramenians had planned an ambush attack. One of the kings servants suggested that they send five horses from what was previously the great Jewish Cavalry. This cautious discussion reminds the reader of a similar discussion which had earlier taken place between the four lepers. The Navi would like to tell us that their is no real difference between a king and smelly lepers.

The day before this incredible miracle Elisha the Prophet had told the king, “tomorrow a Seah of Solet Flour will be a Shekel and two Seah of wheat will be a Shekel.” The king’s adviser had sneered at Elisha asking if G-d would open up the storehouses of Heaven to feed Israel. Elisha told this scoffer, “your eyes will see it but you will not eat from there.”

After entering the Aramenian camp flour, indeed, sold for as little as Elisha had prophesied.

The king’s adviser was appointed to oversee the hoards of people racing to get at the food. The adviser was standing on a platform snidely overseeing the people. The platform broke and the adviser was then trampled to death.

This story demonstrates that G-d does not need an army to overthrow the greatest military powers. He also does not need spies to pass on the weaknesses of the enemy. Four lepers will do just fine.

The snide wording used by the kings adviser asking if G-d would open the storehouses of heaven should remind you of the guarantee given to Benei Yisrael by Malachi. Malachi said that if the people will not be cheap and give their tithes and then G-d will, “open the storehouses of Heaven and I will give you unending blessing.”

It is easy to believe  G-d does not intervene in Economics, but that seems to be a lesson of this Haftara.