Did our Rabbis of Blessed memory eat Empanadas for Shabbat Lunch?

Remember the Day of Shabbat” is how we are told in the Ten Commandments in Parshat Yitro to keep Shabbat. (Shemot 20 – 7)

I am certain our Rabbis Fullfilled the commandment to keep Shabbat by eating Empanada as part of their great Shabbat afternoon feast.

Food reminds us of the holiness of Shabbat

One of the favorite ways of remembering Shabbat is by Dining. We demonstrate that it is Shabbat by spending time to enjoy special food and to enjoy our family and guests. By sitting back and doing nothing on Shabbat we remember G-d’s creation. 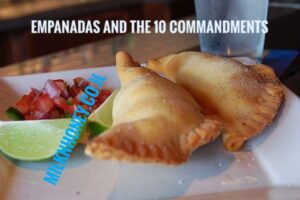 Jewish Customs and the Empanada

Every Jewish community has its special foods that are prepared and eaten in honor of Shabbat. These are usually based on a Jewish twist of local cuisine.  These twists are usually caused by Kashrut and Shabbat issues. An oily empanada is an example of both of these.

Empanadas that were served to Medieval Spanish Jews might have contained chicken, lamb, or even beef, as well as  fried onions and peppers. Tomatoes had not been discovered in the Americas until the Jews were thrown out Spain. This filling would be covered with dough and fried in pure olive oil. See recipes below from 1520 CE.

“It is permissible to place an “Empanada” near the fire in a place that is hot enough to scathe the hand even though the fat stuck to the Empanada melts.” The Rama”h in his glosses states that Ashkenazim are accustomed to be strict unless it is absolutely required, than one can rely on the first opinion.  (Siman 318 – 17)

Many complicated rabbinic discussions went into this Halacha at least since the 12th or 13th century CE.

The essential questions involve squeezing, creating something new and cooking on Shabbat. Most Empanada recipes call for certain forbidden meats and combing meat with milk. In order to make it both delicious and kosher other ingredients and cooking methods were employed. To make such a kosher dish in honor of Shabbat lunch one would want to reheat it.  The rabbis always gave classes on the laws of Shabbat.

The rabbis also certainly made Empanadas in honor of their own Shabbat lunch and needed to instruct those who attended to the kitchen the appropriate way of reheating lunch.

A cookbook published in Catalan in 1520, the Libre del Coch by Ruperto de Nola, mentions empanadas

And if by chance the kids are too fat to be roasted, you may cut them in pieces, and make them into pasteles or empanadas (39)  And you may take fine spice and chopped parsley and put them in the empanadas with a little sweet oil and take this food to the oven; and a little before you remove it from the oven, beat some eggs with verjuice (graprejuice from unripe grapes)  or orange juice and put it in the empanada though the vent hole on the top of the empanada, and then return it to the oven for the space of three Paternosters.  And then remove it, and put this pastel before the lord on a plate, and open it and give it to him.

You must take meat or fish, and give it a boil.  But if it is meat, boil it more than the fish.  And when it is well-boiled, take it from the fire and put it in cold water.  And then make the empanada.  And put in the meat or fish which is cut into small pieces, as big as two fingers, or even smaller.  And put them in the empanada, and then go to the oven and make a vent hole on top of the lid of the empanada so that it can breathe, or else it will burst in the oven.  And when you put the meat in the empanada, also put fine spice with it.  And if it is fish, use a good deal of pepper.  And if it is meat, use a good deal of spice; and a little before it is time to remove the empanada from the oven, put into the vent hole some eggs beaten in a dish with verjuice or orange juice or rose-scented white vinegar.  And then return it to the oven for the space of a Paternoster and an Ave Maria.  And take it out and put it on the table.

You must take a pound of peeled almonds and grind them dry without casting any water or broth on them so that they will become very oily, because the oilier they are the better they will be.  And then take a pound and a half of white sugar that has been pulverized.  And mix it well with the almonds.  And when everything is well-mixed and ground, if it should be very hard, soften it with a little rosewater.  And when the dough has been softened a little, dust a little ginger over it, at your discretion, well-ground.  And then take dough made from flour and knead it with good eggs and sweet fine oil.  And from this dough make tortillas, or  empanadillas, (102) or spiral cakes.  And fill them with said dough.  And then put a casserole on the fire with good sweet oil.  And when it boils cast in these empanadillas. And cook them until they turn yellow like the color of gold.  And when you take them from the fire, cast liquefied honey on top.  And upon the honey, [cast] sugar and cinnamon.

You must take a very plump hen, and remove the wings and the feet and the neck, and stuff it entirely with the yolks of hard-boiled eggs, and cinnamon and cloves stuck in the egg yolks, and raisins, and blanched almonds, and cooked meat from a calf or a kid, and finely chopped, and mint and parsley, also raw egg yolks.  And spices which are fine and saffron-colored; and with all this, mixed with the raisins and almonds, stuff it inside the hen and then sew it up so that none of the stuffing falls out; and then put it on the spit and roast it.  And when it is almost roasted, take a large plate and cast upon it a little rice flour which is very fine, and goat milk, and raw egg yolks, and sugar, and cinnamon, and other spices which are fine and saffron-colored; and beat this all together vigorously.  And thin the said dough with the milk; if you have no milk, take rosewater and a little pot-broth, and mix it all together.  And then, with some hen feathers, spread the said dough over the hen and rub it.  And anoint it, and be careful that you do not thin it too much because it will not be able to cling to the flesh of the hen.  And anoint it enough times that this dough or sauce forms a crust on the hen as thick as the crust of a empanada; and if you wish, you may put wholesome herbs, such as parsley, marjoram and mint, well then you may do it; and turn the spit in such a manner that the said dough stays upon the hen.