Inside Mezuzot and Tefillin – Teaching Your Kids To Be Sharp

I had a thought recently about the Shema Yisrael prayer, that is scribed inside of Mezuzot. It teaches us to believe in the Unity of the on G-d. It also teaches us to teach our children to have sharp minds. The basic concept that their is one G-d is not so complicated, but, man, when you get into cosmological discussion about G-d, the universe and everything, it’s really hard to grasp. Understanding the nature of G-d requires tons of intelligence and you still wont understand. So the mitzvah of believing in G-d requires both an irrational leap of faith as well as great intelligence (Hovot Halevavot)

After the  Tisha Be’av fast, many move into new homes. Your new home, even a rental, needs to have beautiful Mezuza srolls. I am sure that you would love to order Mezuzot from,  a professional Sofer living in Jerusalem,  with 30 years of experience. It’s much better than buying sloppy Mezuzot from a store that has no idea who wrote the mezuza. I would never, ever say that such Mezuzot are  unkosher.

Give me a ring for Mezuzot (or Tefillin, Megilot, Sefer Torah) Orders have been coming in incredibly slowly, so times are difficult. Email steve@milknhoney.co.il or call NY 212-729-8094 or 516-595-1713 Israel 0544572366 . You can view the catalog and order online A house of Mezuzot also makes a great wedding present.

Teaching Your Kids To Be Sharp

The Shemah Yisrael prayer we place inside Mezuzot hung on our doorframes and repeat it several times a day. This prayer contains the words “Veshinantam Lebanecha – Teach them to your children”

These two Hebrew words are very powerful. Tons of discussion can be based on them. The literal and accepted translation of the word “Veshinantam” is to teach. However, the word also contains the best method of teaching them. Its root “Shenen” mean to sharpen. The Halachic Midrash Sifrey (34) points this out, it sites the Pasuk (Tehilim 45-6) Your Arrows are sharpened – “Hitzecha Shenunim”.

The Sifrey says that you should know the Torah so that it will be sharp in your mouth. If anyone asks you a question you shouldn’t stammer when answering instead you should answer right away. (See Rashi)

Rashbam builds on this concept by stating “Veshinantam” is a usage of the root “to sharpen”, you should know how to explain them clearly as “They sharpened their tongue like a sword”   אֲשֶׁר שָׁנְנוּ כַחֶרֶב לְשׁוֹנָם (Tehilim 64 – 4) Interestingly enough the sharpened tongue in that chapter of Tehilim does not refer to those who sharpen themselves with Torah but to the evil enemy politicians who were ministers that entrapped and destroyed people with their evil tongues. We can see that one can use the human mind’s sharpness to clearly understand many concepts starting with Torah knowledge through knowing all about sports or politics to memorizing evil methods like torture, murder, theft and rape.

The Tefillin contains four separate perashiot paragraphs all of which discuss the Mitzvah of Tefillin to tie them to your arm and put them on the head. However, we only repeat two of these constantly, Shema Yisrael and Vehaya Im Shamoa. This is because it states “Veshinantam” only here. That is to say that one needs to know these two Perashiot better. (Sifrey)

The Midrash Tanchuma embellishes this concept of learning the Torah through sharpening. It states that one only studies Oral Torah by very hard work. One who is lazy cannot understand the Oral Torah. The written Torah speaks generally while Oral tradition discusses many details; the written Torah is a fairly small book while the Oral Torah is infinite.

The Midrash Tanchuma itself compiles two separate Midrashic Commentaries about how the Jewish people accepted the Torah. One states that Beney Yisrael accepted the Torah by stating “Naaseh Venishma – We will do and listen” That is to say that Beney Yisrael said we will follow the Torah and understand it after we follow the commandments. However, they say that G-d actually lifted up mount Sinai and held it above the Jewish people. He said, “If you accept the Torah, great. If you don’t want it then you will all be buried there.” Midrash Tanchuma says that Jews said, “we will follow then listen” refers only to the Written Torah. The incident about the mountain being held above them refers to Oral Torah as it is said, “They stood at the bottom of the mountain.”(Warsaw Tanchuma Noach 3 – Shu”t)

The Gemara does a play with the words. It is asked what does the phrase “Veshinantam Lebanecha” mean? They answer that the text needs to be read with a slight difference, read it “veshilashtem” study the Torah in thirds. You should divide your Torah study in the following way one third should be studying Written Torah, Mishna and Gemara.

The philosophical work of Sefer Haikarim says that the Shemah Yisrael paragraph says that we need to love G-d. The rest of the paragraph is an elaboration of how one should love G-d whether in thought speech or action. He states that “Veshinantam” refers to speech. Wearing them as Tefillin and putting Mezuzot on a door are an action of love of G-d. (Ikraim 3-35) 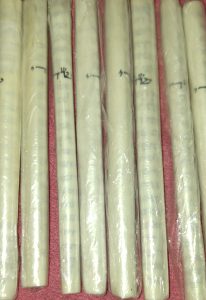 I am sure that you would love to order Mezuzot from,  a professional Sofer living in Jerusalem,  with 30 years of experience. It’s much better than buying sloppy Mezuzot from a store that has no idea who wrote the mezuza. I would never, ever say that such Mezuzot are  unkosher.

Give me a ring for Mezuzot (or Tefillin, Megilot, Sefer Torah) Orders have been coming in incredibly slowly, so times are difficult. Email steve@milknhoney.co.il or call NY 212-729-8094 or 516-595-1713 Israel 0544572366 . You can view the catalog and order online A house of Mezuzot also makes a great wedding present.