Beautiful Wool Tallit With Techelet According to Rambam 13 disks

After the war, Hassidim wanted to make techelet according to the Radzyner rebbe. So they called the Chief Rabbi Herzog to guide them through what he learned from the Rebbe.
Many of the readers of this discussion still work in traditional NY Garment business. What you might not know is that Prof. Otto Elsner, of the Shenkar College of Fibers, discovered and researched the Murex trunculus snail . Read on… 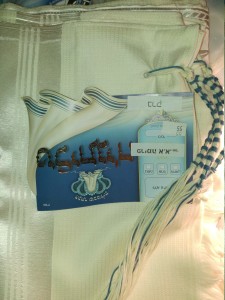 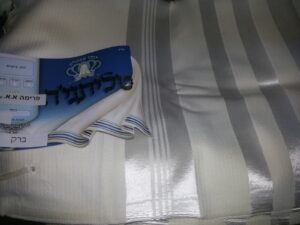 And now we have only white, for the tekhelet has been hidden.” (Bemidbar Raba 17:5)

A coin from the city of Tyre dated 200 C.E. depicts the legend of Hercules’ dog discovering the Murex

The Mediterranean coast was the center of the dyeing industry in the ancient world. “Tyrian Purple” came from the port of Tyre in Phoenicia (now southern Lebanon). The Phoenicians made their wealth trading in the dyestuff, and dye houses were ubiquitous in the region. Because of its lucrative nature, purple and blue dyeing slowly came under imperial control. The Romans issued edicts that only royalty could wear garments colored with these dyes, and only imperial dye houses were permitted to manufacture it. This apparently drove the Jewish tekhelet industry underground. Later, with the Arab conquest of Eretz Yisrael (683 CE), the secret of tekhelet was essentially lost, the dyeing process forgotten.

“Rabbi Meir said: Whoever observes the mitzva of tsitsit, is considered as if he greeted the Divine Presence, for tekhelet resembles the sea, and the sea resembles the sky, and the sky resembles God’s holy throne.” (Sifre, Shelach, 15:39)

The Biblical commandment to wear tsitsit is still observed today, but the prominent blue thread has all but been forgotten. What has remained are passages in the Talmud describing the source of the blue dye – a snail known as the Chilazon. This marine creature had a shell, could be found along the northern coast of Israel, and its body was “similar to the sea.” The dye’s color was “similar to the sky and sea,” it was steadfast, extracted from the snail while still alive, and was indistinguishable from a dye of vegetable origin, called kala ilan (indigo).

“There is an obligation, upon all who are capable, to search for it [the Chilazon], in order to bring merit upon Israel with this commandment, which has been forgotten for the last several centuries. And he who succeeds in this will surely be blessed by the God of Israel.” (Rabbi Gershon Henoch Leiner, the Radzyner Rebbe)

In 1858 the French zoologist Henri de Lacaze-Duthiers found that three Mediterranean mollusks produced purple-blue dyes. One, Murex trunculus, was determined by him (and other scientists, archeologists and historians) to be the source of the ancient Biblical blue.

In the same century, unaware of Lacaze-Duthier’s findings, Rabbi Gershon Henoch Leiner – the Radzyner Rebbe – set out on an expedition to search for the lost Chilazon in a grand effort to restore tekhelet to the Jewish people. He was convinced that a certain squid fit the descriptions of the Chilazon. However, unable to produce a blue dye from the black ink released from this squid, he turned to an Italian chemist, who provided him with a method. Within two years, ten thousand of the Rebbe’s followers were wearing blue threads on their tsitsit. The Rebbe published two books to counter the strong opposition from other Torah scholars who did not agree with the Rebbe’s conclusions.

“The [squid] blood … is mixed with iron filings and a snow white chemical called potash. After keeping it on a large powerful fire for some four or five hours, until the flames burn outside and inside as the fires of Gehenna, the mixture fuses…”  (from a letter sent by the Radzyner dye master to Rabbi Herzog)

In 1913 the Chief Rabbi of Ireland, Rabbi Isaac Herzog (later Chief Rabbi of Israel), wrote a doctoral dissertation on the subject of Hebrew Porphyrology (the study of purple – a word he coined). When he sent samples of the Radzyn tekhelet to chemists and dye experts for analysis, the dye was found to be inorganic – a synthetically manufactured color known as Prussian Blue. Refusing to believe that Rav Gershon Henoch had purposely misled his constituents, Rav Herzog studied the Radzyner dyeing process. The truth soon became apparent. The process called for subjecting the squid ink to intense heat and then adding colorless iron filings to the mixture. This produced the blue color which indeed appeared to come from the squid ink. In fact, under these conditions, virtually all organic substances would yield the same blue dye – the squid was not an essential component. The Rebbe had apparently been misled by an unscrupulous chemist.

As an interesting side note of history, during World War II with the destruction of East European Jewry, the tekhelet factories of Radzyn were ruined and the process lost. When the survivors of Radzyn made their way to Israel after the war, they asked Rav Herzog for the correspondence between himself and the Radzyn dye makers, and through those letters reestablished a tekhelet industry in Israel which still flourishes to this day. Thus Rav Herzog is responsible both for discrediting Radzyn’s tekhelet and at the same time for rescuing their process from destruction.

The vein is removed… and to this salt has to be added… three days is the proper time for it to be steeped, and it should be heated in a leaden pot with 50 lbs. of dye to every six gallons of water. (Pliny the Elder, Natural History 9.61.133, first century BCE)

Rav Herzog knew of the work done by Lacaze-Duthiers and others, and realized that all the evidence pointed to Murex trunculus as the most likely candidate for the tekheletsource. Two problems, however, prevented Rav Herzog from positively identifying that snail with the Chilazon. First, the dye obtained from the trunculus was purplish-blue, not pure blue as tradition maintained. Second, this snail has an off-white shell with stripes of brown, hardly fitting the Talmudic description of the Chilazon as appearing similar to the sea.

Current research has supplied the solutions to these objections. The shell appears off-white with brown stripes when it is out of the water, cleaned and polished. In its natural element, however, trunculus is covered with a coat of sea fouling the color of the ocean. Everything in its vicinity is covered with the same fouling, making it almost impossible to distinguish the snail from the sea bed on which it is found. The Talmud’s description is of the Chilazon in its natural habitat!

The riddle of producing a pure blue color from the snail was serendipitously solved. While researching the methods used by the ancient dyers, Prof. Otto Elsner, of the Shenkar College of Fibers, noticed that on cloudy days, trunculusdye tended towards purple, but on sunny days it was a brilliant blue! He found that at a certain stage of the dyeing process, exposure to sunlight will alter the dye, changing its color from purple to blue. To the dye masters of old, working in the bright Mediterranean sunlight, this was certainly no secret.

“Have mercy on us and rebuild Your city speedily in our days, and bring us to peace, to our Holy Land, and let us merit the return and revelation of the Chilazon, that we may be privileged to fulfill the commandment of tekhelet in tsitsit.”
(from the prayers of Rabbi Nachman of Bratslav)

The evidence for identifying the Murex trunculus as the source of tekhelet is decisive, and goes beyond merely fitting the general descriptions of the Chilazon as found in the Talmud:

“The revelation of the Chilazon is a sign that the redemption is shining near.” (Divrei Menachem 25)

Recently much has been accomplished to reestablish the tekhelet dyeing process. Dr. Irving Ziderman, of the Israel Fiber Institute, has published a number of articles describing the scientific aspects and religious implications of the trunculus dye. Rabbi Menachem Borstein has written a book surveying the relevant Jewish legal aspects of tekhelet, and Prof. Tzvi Koren, of the Shenkar College of Fibers, has done rigorous chemical analysis of the dye from present day snails as compared with samples from archeological artifacts dating back 3,200 years. Until a few years ago, however, tekhelet could be found only in the library or the laboratory.

In 1985, Rabbi Eliahu Tavger of Jerusalem began researching and writing a book about ritual fringes – the tsitsit – and became convinced that authentic tekhelet had been discovered. Determined to actualize his newfound knowledge, and after much trial and error, he succeeded in applying the process according to the halakha from beginning to end. Based on Rabbi Tavger’s pioneering work, P’til Tekhelet was formed in an effort to provide tekhelet to the general public. Today, after more than 1,300 years, tsitsit are again being made with the elusive thread of tekhelet.

P’til Tekhelet – The Association for the Promotion and Distribution of Tekhelet – is a non-profit organization based in Israel. P’til Tekhelet provides educational programming and resources pertaining to Tekhelet, and produces Tekhelet for tsitsit. The association is comprised of a small group of individuals whose work is done lishma – for the express purpose of making tsitsit as the halakha requires.

Prima AA, the flagship of Talitnia’s prayer shawls, has been manufactured for over 100 years. The tallit was originally designed by Rabbi Jacob Koppel Sviyetchkovski towards the end of the 19th century in Poland, and the tradition of manufacture continued in the Land of Israel by his son, Rabbi David Avner, after his immigration to Israel.

Today you can find prayer shawls of this type in various Holocaust and Heroism memorial sites, among them, the Auschwitz death camp museum and the town of Tikochin in Poland.

This exceptional tallit is manufactured from only the purest, fine and smooth wool yarns densely woven to provide the tallit a prestigious appearance, as well as long lasting durability.

Above all, this tallit represents the many years continuity of Talitnia’s rich tradition, and proudly stands as a living testament to the victory of the Jewish People.

The minimum number of spines that you can tie, according to Rambam, is 7.  This is often done with thinner strings, Here is a comparison. The thinner 7 spine option can cost at least $40 less.